Design a site like this with WordPress.com
Get started
Skip to content
Bob Edlin Government January 23, 2023 5 Minutes

Buzz from the Beehive

Again we must report that nothing fresh has been posted on the Beehive website since 19 January, when Jacinda Ardern announced the General Election will be held on 14 October and her resignation as Prime Minister.

But we are eagerly awaiting the posting of a statement by Carmel Sepuloni, the new deputy prime minister, which will update a statement she posted on 20 January last year headed Quarterly benefit numbers show highest number of exits into work.

As Minister of Social Development and Employment, she was commenting a year ago on data reported in the Benefit Fact Sheets from her department for the December 2021 Quarter.

She brayed that the Government’s strong focus on supporting more people into work was reflected in benefit figures released at that time which showed a year-on-year fall of around 21,300 people receiving a main benefit in the December 2021 quarter.

“Our response to COVID has helped to create a resilient labour market which in turn has ensured our economy remains strong. Protecting jobs and livelihoods, and supporting more jobseekers into work will continue to be a key priority of the Government,” Carmel Sepuloni said.

Our monitoring has uncovered no statement on the Beehive website from Sepuloni on the latest welfare stats.

We may suppose she has been much too busy engaged in the caucus politicking that has resulted in her promotion in the ministerial pecking order.

Thankfully, bloggers David Farrar and Lindsay Mitchell have been able to enlighten us.

What is most amazing about all this, is that almost without exception every single shop I go into to, had an ad up pleading for staff.

On January 19, the day when the Beehive website news dried up after Ardern announced the election date and her resignation, Lindsay Mitchell posted a report titled December benefit stats give cause for concern

The latest benefit stats have just been released and while the Jobseeker numbers have declined, not so numbers for the other two main benefits – Sole Parent Support and Supported Living Payment:

Number and proportion of people receiving Sole Parent Support at the end of the last six December quarters. 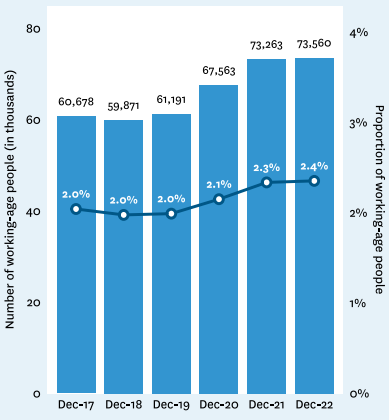 Number and proportion of people receiving Supported Living Payment at the end of the last six December quarters. 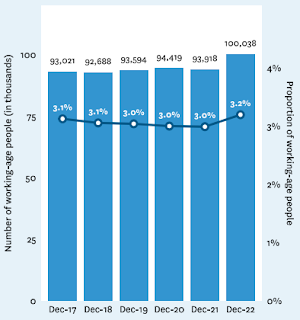 The rise in what used to be called the Invalid benefit (now Supported Living Payment above) is not insignificant. There are around 6,000 more people permanently unable to work due to illness. Almost half of the increase is due to psychological or psychiatric illness.

Given what we know about the level of mental illness within corrections facilities, I wonder how many of them are ex-prisoners? Recall that the prison population is down around thirty percent or 3,000.

There will almost certainly be a contribution from the under-performing health system as waiting lists continue to be a major problem.

As for the increase in sole parent reliance, it shouldn’t be happening. Not with the amount of work that is currently available. The last Labour government leaders – Clark and Cullen – were very keen to lift the workforce participation of sole parents to the same level as partnered parents.  Clark was a particular type of feminist. She was interested in women empowering themselves through independence.

Ardern’s Labour is different. Ideologically they are closer to the Greens. Remember Metiria Turei’s championing of benefit fraud justified by motherhood and need? Labour has since implemented many of the Green’s welfare policies as they relate to sole parents. The impetus to improve the lot of sole parents and their children through employment has dissipated. Which is a great shame.

Overall the total number of benefits in place is down from December 2020 but still up 22 percent on December 2017:

Number and proportion of people receiving a main benefit at the end of the last six December quarters. 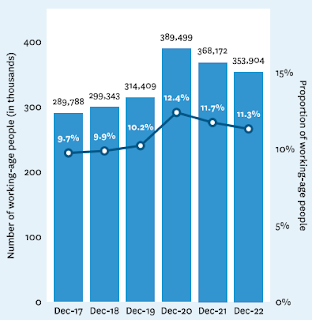 Not a good result.

For good measure, Mitchell today reports on the performance of Sepuloni as Minister in charge of the department which is increasingly being burdened by the demands of looking after the country beneficiaries.

Hot on the heels of media nonsense about Ardern’s departure – for instance, it was driven by misogyny despite many of her harshest critics being females – comes the fawning over Sepuloni.

Sepuloni’s elevation to the top may challenge this. She’s Social Development Minister and may keep this role after the reshuffle (she’s excelled, so far).

And at RNZ Jane Patterson says:

The MP for Kelston, Sepuloni has been a steady pair of hands in the social development portfolio and makes history as the first Pasifika deputy prime minister.

For starters emergency housing is in the social development portfolio. The take-over of motels leading to social mayhem (think Rotorua) has been a tragedy for those housed in them and those in their surrounds. The waiting list for public housing has sky-rocketed since Sepuloni has been Minister.

EVERY main benefit has seen increased numbers since 2017. Covid played a part, but the upward trend was established before 2020.

Never before has New Zealand seen demand for both skilled and unskilled labour at current levels yet 11.3 percent (up from 9.7 in 2017) of the working age population is benefit-dependent.

Compounding this, the average length of time people are spending dependent has gone up.

Sepuloni has driven some extraordinary changes that defeat what the last Labour government was trying to achieve. No longer requiring mothers on the benefit to name fathers of their children is a prime example.

The increases to benefit rates and other financial supports have eaten away the incentive to work as the difference between income from work and income from a benefit dwindles. Previous Labour governments resisted linking benefits to wage inflation but Sepuloni did exactly that in 2020.

In fact, this Labour government has implemented many of the Green Party’s welfare policies including diminished use of sanctions to enforce work obligations.

Her own ministry’s annual reports acknowledge the department is not moving in the right direction in a number of areas.

Worst of all Sepuloni has overseen a rise in children living in unemployed homes. The damage to their outcomes is well researched and documented. But unheeded by this government whose sole focus has been to lift incomes with their fingers firmly in their ears over the unintended consequences of paying people to do nothing … except have children.

If all of the above is “excelling” I hate to envisage what failing looks like.

Sepuloni has not been a great Minister. That the media are painting her as such demonstrates ignorance and bias. The only thing that has kept the social development portfolio largely away from the headlines is the comparatively worse performance of police, education and health.